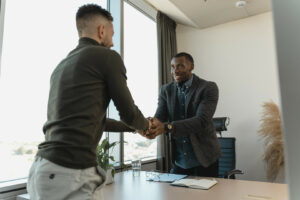 A Guide to Hiring Veterans in
Your Small Business

There’s a strong business case for
hiring veterans. Military veterans bring unique experiences and
skillsets to the table and are known for their loyalty, integrity,
and strong work ethic. Companies that hire military veterans also
benefit from tax incentives and a positive public image. Want to know
more? Here’s how to tap the talent of America’s veterans for
business success.

From a civilian’s perspective, the
military workforce can seem like a different world. However, military
veterans possess many skills valued by employers.

Veterans are widely recognized for the
soft skills they bring to the civilian workplace. These include
skills like:

Hard skills specific to a veteran’s
MOS can translate to the civilian workforce as well. Take, for
example:

Employers may be eligible to receive
incentives for hiring veterans.

The most well-known is the Work
Opportunity Tax Credit. This federal tax credit of up to $9,600 per
qualifying worker is available to employers who hire target
groups including certain military veterans. Before
claiming the WOTC, employers must apply for and receive certification
of a worker’s eligibility.

The HIRE Vets Medallion Award is a
federal-level award that recognizes companies that hire, retain, and
develop veteran employees. Small employers can qualify for a platinum
or gold medallion based on the percentage of veteran employees among
other
metrics.

How to Become a
Veteran-Ready Employer

Employers should do more than hire
veterans. Creating an environment where veterans thrive maximizes the
benefits of hiring military veterans.

Getting approved as a Registered
Apprenticeship Program is one important way that employers can
recruit and develop veteran employees. Registered apprenticeship
programs that get certified under the GI Bill are eligible to provide
GI Bill benefits including housing allowances and
stipends to qualified apprentices.

Employers should consider appointing a
dedicated human resource professional to support veteran employees.
Veteran employee initiatives should help veterans integrate
and adapt to the civilian workforce as well as learn
job-specific skills and concepts. This requires managers and leaders
to acquaint themselves with military culture and terminology in order
to meet veterans on common ground.

Familiarity with military culture also
empowers organizations to effectively screen and interview veteran
candidates. Tailoring
questions to military applicants ensures talented
candidates don’t fall through the cracks as a result of irrelevant
interview questions. Interviewers should questions about an
applicant’s discharge status or disabilities. Such questions are in
violation of the Uniformed Services Employment and Reemployment
Rights Act and the Americans with Disabilities Act.

Military veterans add diversity to your
team while offering hard and soft skills that are highly valued in
the civilian workforce. However, the advantages of hiring veterans
may not be obvious to organizations new to military culture. Use this
information to improve your veteran recruitment and retention
strategies so your company can reap the benefits of hiring America’s
veterans.

The number of Disabled Vets in the US are at an all time high, so much for this is not going to be another Vietnam, no its going to be longer and have a toll much larger.

The number of disabled veterans has jumped by 25 percent since 2001 to 2.9 million at a cost of about $33 Billion a year.

The VA system is getting overloaded with new cases, health care cost is rising, waiting time for health care is getting longer and there is no end in site.

I have a feeling the Government will try to deny claims and push health care cost off to the disabled vets and other vets with no disabilities just to cut cost.

We have disabled vets from every war: Gulf War, Vietnam, Korean, WW1 and WW2; all still working on problems that were unique to that war.

The only thing all these wars had in common was the killing, maiming and long term health effects suffered by the people who fought in these wars.

“SFBV” – – Considering the tons of depleted uranium used by the U.S., the Iraq war can truly be called a nuclear war. Preventive Psychiatry E-Newsletter charged Monday that the reason Veterans Affairs Secretary Anthony Principi stepped down earlier this month was the growing scandal surrounding the use of uranium munitions in the Iraq War.

Writing in Preventive Psychiatry E-Newsletter No. 169, Arthur N. Bernklau, executive director of Veterans for Constitutional Law in New York, stated, “The real reason for Mr. Principi’s departure was really never given, however a special report published by eminent scientist Leuren Moret naming depleted uranium as the definitive cause of the “Gulf War Syndrome’ has fed a growing scandal about the continued use of uranium munitions by the US Military.”

Bernklau continued, “This malady (from uranium munitions), that thousands of our military have suffered and died from, has finally been identified as the cause of this sickness, eliminating the guessing. The terrible truth is now being revealed.”

He added, “Out of the 580,400 soldiers who served in GW1 (the first Gulf War), of them, 11,000 are now dead! By the year 2000, there were 325,000 on Permanent Medical Disability. This astounding number of “Disabled Vets’ means that a decade later, 56% of those soldiers who served have some form of permanent medical problems!” The disability rate for the wars of the last century was 5 percent; it was higher, 10 percent, in Viet Nam.

“The VA Secretary (Principi) was aware of this fact as far back as 2000,” wrote Bernklau. “He, and the Bush administration have been hiding these facts, but now, thanks to Moret’s report, (it) … is far too big to hide or to cover up!”

“The long-term effects have revealed that DU (uranium oxide) is a virtual death sentence,” stated Berklau. “Marion Fulk, a nuclear physical chemist, who retired from the Lawrence Livermore Nuclear Weapons Lab, and was also involved with the Manhattan Project, interprets the new and rapid malignancies in the soldiers (from the 2003 Iraq War) as “spectacular … and a matter of concern!”

When asked if the main purpose of using DU was for “destroying things and killing people,” Fulk was more specific: “I would say it is the perfect weapon for killing lots of people!”

Principi could not be reached for comment prior to deadline.

By U.S. Air Force, Medically Retired SSgt Jeffrey Scott Flesher
November 2009
This story isn’t all that different from that of other Vets I’ve met having the same symptoms, and history as myself. So I don’t intend this article to be just about me; but Vets like me — thus bringing to your attention, the struggle about Vets with Gulf War Illness (GWI); AKA Gulf War Syndrome (GWS), a disease that effects thousands of us, astoundingly still misunderstood, in spite of being openly acknowledged by the VA.

“I have been turned down for any type of Medical Assistance, Medical Treatment or Medical Devices that the VA deems Alternative”. . . let me explain. I’ve been treated for what I now call Gulf War Illness since 1991, having gotten it in November of 1990, and have not responded to any conventional medical treatment in that time period. I have tried every known mainstream Medicine, and Medical Treatment for sleeping disorders, depression, anxiety, PTSD and pain; with no help whatsoever in the long run.

Gulf War Syndrome (GWS) history: I came down with GWS in November of 1990 after getting 12 or more shots in the same day (Cocktail Inoculations), some of which were 3 part shots, again, all given in the same day. Shots like Anthrax’s, Botulism Toxin (BT), Plague, as well as experimental Vaccines and Drugs. I got sick and had no idea that what I got was GWS until after the Military Medically Retired me for having all the same symptoms as GWS.

I have been diagnosed by the Air Force and VA as having a rare sleeping disorder called Sleep State Misperception Disorder, Mild Periodic limp movement disorder (PLMD) and Abnormal EEG with fast activity during stage 2 sleep, with low REM sleep, culminating in No REM state sleep. While this is significant to me, it doesn’t even get rated by the VA — so why is this I ask you? Apparently the VA doesn’t deem it very important; but will rate you on things that may be the cause of this.

I have been Diagnosed by the Air Force and VA as having:

Just to name a few.

During my tour in Kuwait I was exposed to Depleted Uranium, Lead and Mercury in the water supply, Oil Fires, and many other toxic chemicals, that built up in my body, intern causing pain like Fibromyalgia, and Neuropathy. What I really need is to be detoxed with chelation therapy; but this is a Alternative Medical treatment not authorized by the VA, even though its the only medical treatment that could possibly help.

How do I feel you may ask? I don’t sleep good, I wake to feel like I didn’t sleep at all. I’m tired all the time, don’t feel like doing anything. Everything hurts: my back, my feet and my hands; to the point I can’t sleep at all. I wake up to a very load ringing sound in my head that never goes away, this alone can drive you crazy. I have very bad memory problems, so I don’t remember much of yesterday, so in the long run, all the days just run together into years and I have no sense of time what so ever. Its a vicious circle of pain and not sleeping that feeds the Anxiety and Depression and all these other symptoms that I have.

Now I ask you this:

If you answer no to any of these questions; you must work for the VA or DoD.

It all comes down to some kind of Brain damage; to the point I do not communicate very well and can not interact with the general public all that well; in general I stay at home and never go out; a shut in; like most vets like me, I don’t want anything to do with the outside world or have anything to do with Doctors that just don’t understand this at all; they keep giving me a line about how I have to just get over this and get on with my life; they might as well have handed me a gun and just told me to get it over with; that is what they want is for all Vets like this just to check out, commit suicide; they tell us that this is acceptable behavior under these circumstances and the new Government Policy is almost demanding it.

I have to take sleeping medication every night; they don’t work most of the time; since I have built up a tolerance for all such medications; when if fact there is a device called an Alpha-Stim unit, which will help me to sleep without the consistent use of sleeping pills, which I have overdosed on many times over the years, trying to get some sleep; but then again; I still think that’s what they want, is for me to just die; since I’m nothing but a drain on their resources. I will also add that the Alpha-Stim unit will help with Anxiety and Depression as well as PTSD, and in the long run would be cheaper than all the medication and treatment I get for the same symptoms. From more information visit: Allevia Health